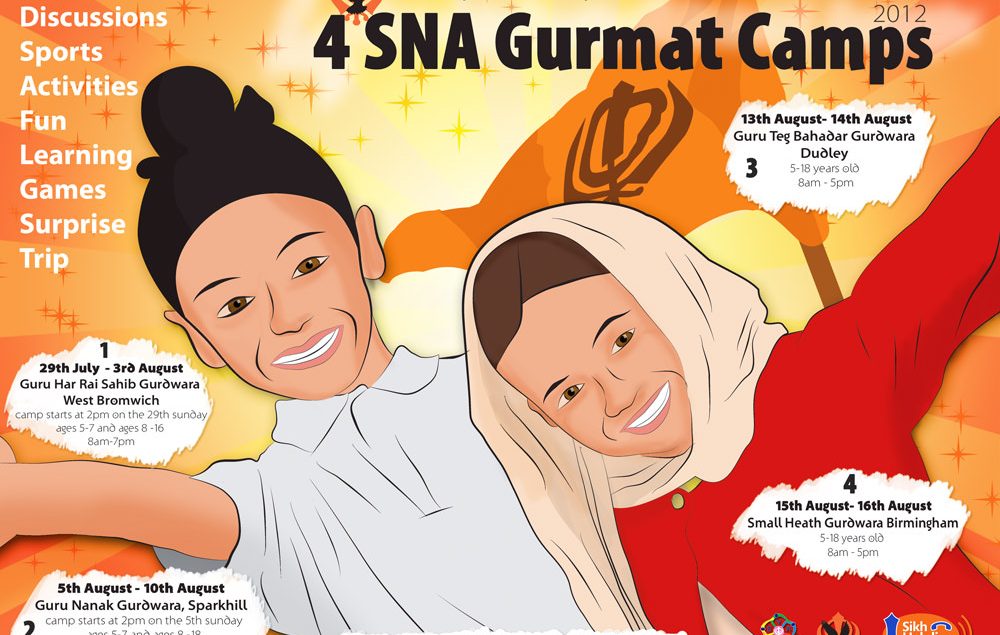 I started off in graphics quite a long time ago, I was pretty handy around a computer (a 386 with 4mb ram) and was asked to produce some leaflets for a gurmat camp. Unfortunately I wasn’t very handy at graphics so made a lot of crappy posters. I kind of grew up in my teens in and around the SNA gurmat camps in South Birmingham, where I made a lot of friends.

Gyani Sukha Singh(AKA the cyber Gyani or his lesser known name of The Poster Ninja) is a true LEGEND who runs the camps like clockwork. He is dedicated, unshakeable and an inspiration to all who have the pleasure to be in his company.

BUT, there is one part of his operation that is just ran like a proper desi operation. A few weeks before the camp, everything’s organised, but, no one knows about it, oh my god we need a POSTER, otherwise no one will know, no one will come and eat the chips and beans and our future will be doomed.

It was always last minute, Giani was always asking for the poster a few weeks before the camp and  it was always urgent. Me being a hero(in my then, warped sense of reality), who had the time management of a hamster on cocaine,  would always procaim  “alright then, I will Do it!”. Giani would then ask with a hint of uncertainyand his thick malaysian accent “are you sure, singh? – la”. I would think about it and my brain would be saying “what the hell are you getting yourself into?” but my mouth would just say “yes, I can see it already , its in my head”

What was to follow would be repeated in history and torment me throughout my early years. As all the ducking, diving and hiding would ensue with me trying to avoid gyanis phone calls, creeping around the gurdwara, and disguising myself as a comittee member because the poster wasn’t finished yet.

heck! the poster wasnt even started yet and then when he would finally catch me off guard, by ringing me at home and on my mobile at the same time while I was trying to ignore both.

I would say “the poster is ready, almost finished”, but the poster only really existed in my head in some vague form of my crazy imagination. Finally the panic would set in as I had to get the poster done before gyani realised that I had not even started it yet.

I believe that more then half of the initial design process happens in the mind, the pondering and formulating of an idea that might work and the many possibilities that could work, but Giani never bought any of my arty farty excuses, he needed to SEE! something

Well, that was the old days.  I would like to say things have changed since I have grown up, I am wiser, more organised and I am a professional now. Giani is still the same but he is wiser and has more experience,   but, 15 years on , its pretty much the same old cat and mouse games.

Only now,  I am always demanding a simple email with the details for the poster, but Giani won’t do that, that’s just too logical and simple. he has to ring me at odd hours of the day, telling me that the dates have been changed and the kids will be arranged in some sort of odd grouping according to their age ranges and gutti sizes, while im sitting on the toilet trying to make a mental note of it all.

“Giani just send me one email with all the details in it! that way I have all the information I need in one place”

But NO! gyani cant do that. Sometimes i’ll say I need some photos, he will cleverly divert me to one of his thousand image galleries or his millions of facebook posts to try and find a suitable image. It just isnt going to happen is it? I don’t have the time, especially when gyani is on his way to my house and I have to get a poster ready and make it look like I had been working on it for days.

Well I guess its all been fun, ignoring Gianis phone calls and living on the edge, hoping he won’t turn up on my doostep and force me to sit with him for hours and force me to design a dreaded poster there and then.

Anyway back to the design of the posters. I’ve always tried to do something interesting and fun to make the posters stand out and apeal to young people. This time around I decided to do something cartoony. I recently bought a Wacom Tablet, the intuos 5, and yes i’ll post a review of it soon. So I learnt how to use Adobe Illustrator last saturday and I was really amazed at what it was capable of. So when gyani rang me and said “Urgent! camp is in 3 weeks, we need a poster or we will be DOOMED!” as usual.

I said ” I have an idea, leave it to me” then i got really busy with other stuff, and gyani started to hunt me down, ringing me at work and then I had to pretend I don’t live at home. But time was up, gyani was coming so I had to do something. I took my two kids, 7 and 5 years old, into the back garden and then asked them to look happy and smile for the camera. After some shouting and a few slaps, I managed to get a decent-ish picture on my mobile. So I imported it into illustrator and drew over it with simple vector shapes to create a cartoony look. I also drew a vector of a nishaan sahib and painted some random stars onto a spiral vortex pattern. I then imported the illustration straight into photoshop to start adding text and information.

here are some posters from previous years

i want ur help in my project if ur interested then tell me
taran.veer1@gmail.com