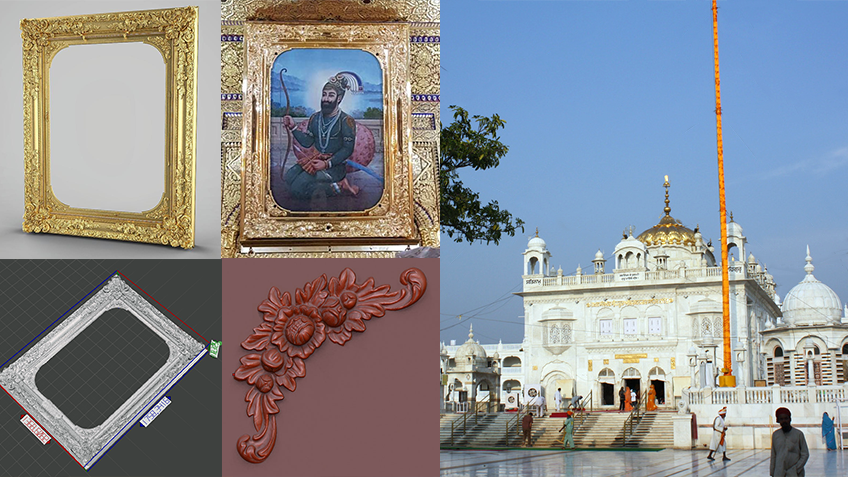 In early 2018 I was contacted by Inderjit Singh Mann from Abu Dhabi regarding an old frame from Sachkhand Sri Hazur Sahib which is situated in the main complex. The frame houses the main painting depicting the tenth Sikh Master, Guru Gobind Singh Ji. The painting of Guru Gobind Singh ji was painted by Hari Singh from Amritsar (circa 1900) who created many masterpieces including a painting of Rabindranath Tagore which presently resides at the Parliment House. The ornate frame was carved out of wood and had become worn and warped over the years due to excessive heat and wear. Inderjit Singh expressed a desire to take on this seva(service) and enlisted my expertise in creating an accurate replica of the frame.

As the original frame was severely warped and damaged we decided that the best way forward would be to replace the frame in its entirety whilst maintaining the original features.

Stage one of the process was to 3D scan the original frame, which was carried out by a local company in India. Once it was scanned and I received the 3D model it became apparent that there was extensive damage to the details due to wear and tear.

My role involved taking accurate measurements from the scan and recreating a base frame that matched the original with the warp corrected. I then remodelled the beading and linear pattern details using the non damaged parts of the scan as a reference.

Thereafter I focused on the ornate flower detail work of the frame. I carefully extracted each detail section and projected them back onto the new base that I had built. It became apparent that the initial scan failed to extract the sharper details of the carving. I brought back the detail by digitally re-sculpting the detail back into each section. This part of the process was extremely time consuming and difficult.

Additional details were requested by Inderjit Singh and Baba Kulwant Singh ji. Primarily some weapons and the hawk of Guru Gobind Singh Ji. in addition to this, semi precious stones were embedded to represent individual sacrifices of martyrs from Sikh History.

The Forty semi precious stones on all the corners of the frame symbolise the bravery of the 40 Muktas. The stones used are all 13 mm in diameter and ar agate, amber, coral, coralina, lapis, malachite, quartz and torquoise. A 54 carat freshly mined and cut stone fixed at bottom is in the memory of Mata Bhago Ji.

The frame also has a hawk and horse on the each side both of which were very close to guru Gobind Singh jis heart. The mother pearls around the frame are like a Blanket of Protection “Hind Di Chadar” calm and pious and represents the bravery and sacrifice of Guru Teg Bahadur Ji

Once the Digital Model was approved it was sent to a manufacturer in Italy who then produced the frame from a composite of brass and copper with a gold plated finish. the final Frame weighed in at 140kg. It was installed in the shrine during the Guru Nanak Gurpurb celebrations in November 2018.

The project was a fascinating insight into how 3D technologies can be used to restore and recreate historic relics. I am thankful to Bhai Inderjit Singh ji from Abu Dhabi and Jathedar Baba Kulwant Singh Ji under whose supervision the seva was undertaken. The frame was paid for by the kind donations of Bibi Maninder Kaur Bedi. Additional thanks to the Sachkhand Board and special Thanks to the efforts put in by Bhai Jatinder Singh Ji.

Hazur Sahib, also known as Abchal Nagar, is one of the five takhts (“thrones”, seats of temporal authority) in Sikhism. It is located on the banks of the River Godavari at the city of Nanded in the state of Maharashtra, Western India. The gurudwara within the complex is known as Sach-Khand (Realm of Truth).

The structure is built at the place where Guru Gobind Singh Ji, the tenth Guru’s encampment was. The inner room of the gurdwara is called the Angitha Sahib and is built over the place where Guru Gobind Singh was cremated in 1708 and holds ancient relics belonging to the tenth master. The gurdwara was built between 1832 and 1837 by order of Maharaja Ranjit Singh Ji (1780–1839)